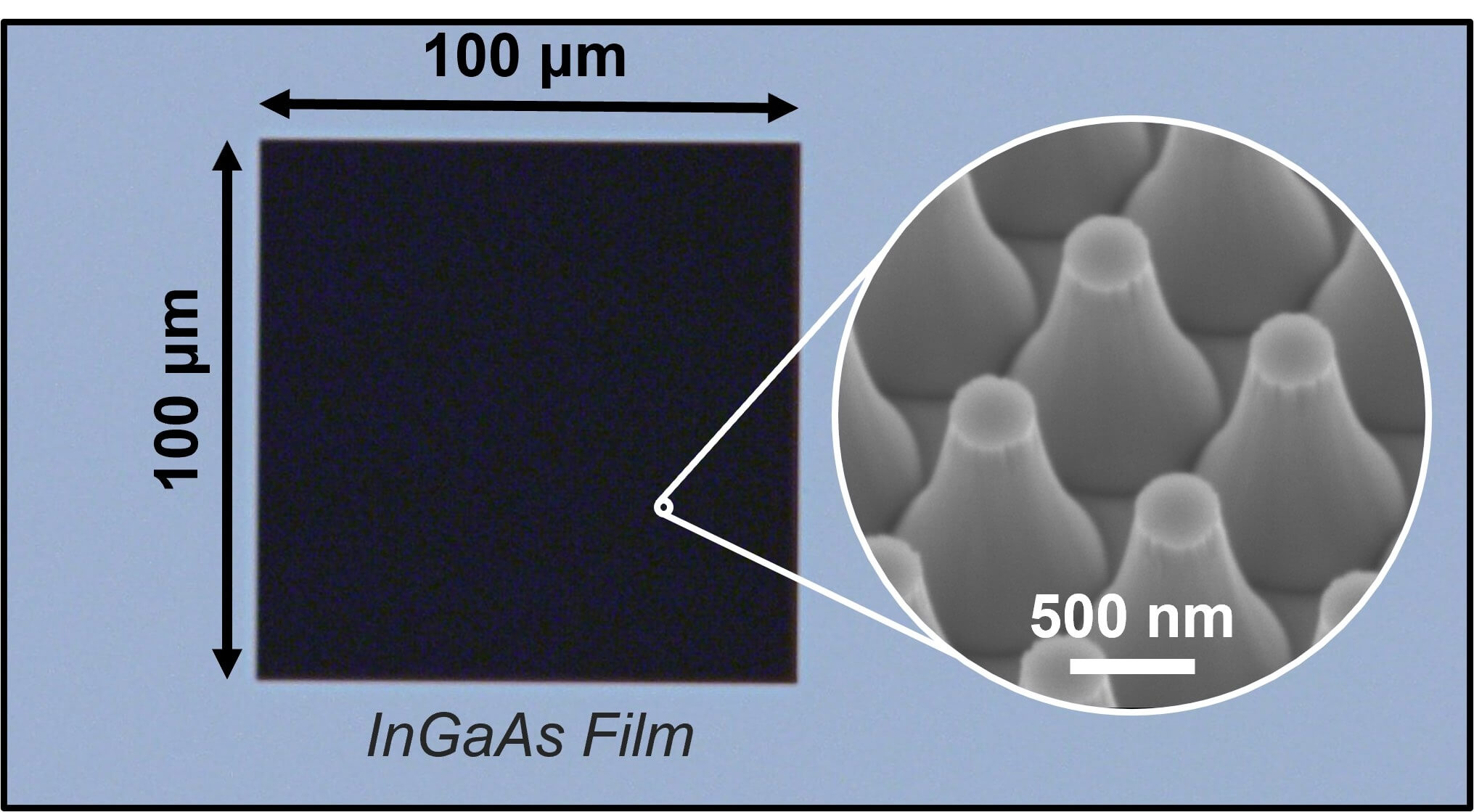 The creation of a material that absorbs the majority, if not all light, would improve the effectiveness of health-related equipment. Michael Reimer, a faculty member at the Institute for Quantum Computing and researcher in Electrical and Computer Engineering at the University of Waterloo, has set his sights on creating an artificially engineered material, known as a metamaterial, to do just that. Reimer and his research team have achieved this goal and developed a new class of materials that absorbs light better than anything that has existed to-date.

Reimer’s team includes postdoctoral fellow Sasan V. Grayli; PhD students Brad van Kasteren, who developed the numerical calculation and design, and Burak Tekcan, who worked in the Quantum Nano Fabrication and Characterization Facility at Waterloo to realize the nanowires as close as possible to the shape of the nanostructures used in modeling; and a collaboration with Professor Zbig Wasilewski from the Department of Electrical and Computer Engineering, who grew the high-quality semiconductor material used to fabricate the nanowires. Together, they made a new class of material that is able to absorb over 99% of light. By carefully designing the shape of the nanowires and the spacing between them, the team demonstrated the ability of the metamaterial to absorb light over a broadband range of wavelengths.

“We showed a very good agreement between the theory that we have developed to explain the absorption characteristics of the nanowire array and the experimental work. It’s remarkable that we were able to measure 93% absorption efficiency over an unprecedented spectral range, from 900 nm to 1650 nm,” said Grayli.

Now that Reimer has this new material, the next step is to incorporate it into devices. The first device his team is trying to realize is a detector capable of measuring single particle of light, also known as photons. In the longer term, he is trying to make a single photon-sensitive camera for eye imaging.

In the context of eye health, currently, if high efficiency monitoring and detection is desired for the area outside of what your eye can see, superconducting nanowire detectors that transport electrical charges without resistance at the nanoscale are required. The portability and usability of these detectors has always been a limitation of their use given they need to be cooled to three kelvin. Conversely, semiconductor technology including what Reimer is working on with his team is portable, and with this project they are developing a new semiconductor photodetector with higher efficiency than all other semiconductor-based detector technologies to date. Previous silicon and alloy-based photodetectors used for eye imaging have a limited efficiency at wavelengths of light between 800 nm and 1000 nm, also known as the valley of death. The creation of this new material that provides higher absorption will have benefits in the kind of applications that are working in the wavelength range of 900 nm – 1650 nm.

For this experiment, the researchers used a broadband light source to illuminate the fabricated metamaterial and measured the amount of light that was reflected by it and transmitted through it. This allowed them to deduce how much light was absorbed by the material. The nanowires typically act as waveguides to direct the light, but with careful arrangement of the nanowires in an array, the portion of the light that is not trapped in the individual nanowire can be collected by the neighbouring nanowires, leading to over 90% absorption of the incident light. Much effort has gone into tailoring the shape for the nanowires so that they no longer act like a bulk material that reflects a significant amount of light, and instead creates a mechanism for improved light absorption due to their spacing.

With the development of this new material, which promises more light absorption, Reimer believes there will be large-scale healthcare and telecommunications implications. Returning to the research, Reimer is now directing his attention to the surface of the nanowires to avoid unwanted false signals on the detector to reach the single photon level. He is looking into ways to treat the surface to lessen the amount of material noise while maintaining the high absorption characteristics of the metamaterial in the desired wavelength range. For now, they’re one step closer to higher efficiency technology that will help with detecting early signs of blindness and calibrating medicinal dosages for cancer patients.

This research was supported in part by the Canada First Research Excellence Fund through the Transformative Quantum Technologies (TQT) program.