Researchers supported by Transformative Quantum Technologies (TQT) have fabricated quantum detectors with remarkable electrical and optical properties that will advance photodetection across a broad range of applications.

Detection of light down to the single photon level opens up new possibilities for various technologies. “When dose monitoring for cancer treatment, we need high sensitivity photon detection to measure the luminescent signal that gauges the amount of medicine being administered,” says Burak Tekcan, a Ph.D. student with TQT. “There are also many applications where we need to detect low light levels. For example, as single photons travel large distances, such as fibre optical and satellite quantum communications, they get attenuated; sensitive quantum detectors will allow us to register these weakened signals.”

Currently, there are two leading technologies for single-photon quantum detection: superconducting nanowires and semiconductor-based single avalanche photodiode (SPAD) technology. Superconducting nanowires have excellent detection efficiencies and precise timing resolution but are limited by the need to operate under cryogenic temperatures, thus limiting their portability. SPAD technology overcomes the limitations of low-temperature operation, but high efficiency is only achievable for a small wavelength range and with poor timing resolution.

Thus, there is a need to develop photodetectors that overcome the drawbacks of current commercial technologies; this is what the TQT team, led by Michael Reimer’s research group, has set out to do. Using semiconductor nanowires arrays to improve the current semiconductor-based technology, they have shown near-unity detection efficiency over a broad wavelength range at room temperature is possible. “If designed properly, semiconductor nanowire arrays show remarkable properties – they are very good at absorbing light and reducing reflections, thus increasing the sensitivity of the photon detection. The arrays are also much thinner than typical bulk semiconductor devices for single-photon detection, which reduces the travel distance of an electron that is generated from photon absorption and results in higher speed detection than current commercial devices,” says Tekcan.

The researchers first developed tapered indium phosphide (InP) based nanowire arrays that were shown to have near-unity absorption of visible to near-infrared light, low reflection losses, excellent measured external quantum efficiency, and fast response time. Other nanowire arrays made from indium gallium arsenide (InGaAs) extended the photodetection capabilities over an exceptional wavelength range of 900-1500 nm, even farther into the near-infrared region, which had previously only been possible with bulk semiconducting single-photon detectors. Thus, these devices show unprecedented performance, with peak efficiency and timing resolution comparable to commercial superconducting nanowire devices but with superior bandwidth and room temperature operation.

These novel quantum detectors markedly show increased efficiency in the “valley of death,” a wavelength range of 800-1000 nm, whereby detection efficiency is low for current quantum detectors. One application of this is Optical Coherence Tomography (OCT). OCT is an imaging technique that uses light waves within this wavelength range to take retinal images. “It has been realized that if you work at around 1000nm with OCT, you can image deeper layers of the retina, thus obtaining more information. Our detectors have drastically increased quantum efficiency at this wavelength over commercially available devices,” says Tekcan. These improved detectors improve the axial resolution and sensitivity of OCT imaging, potentially leading to earlier detection of blinding diseases.

Tekcan adds that these devices were not just developed for one application – by making adjustments and incorporating different semiconductor materials, near-unity absorption efficiency may be achieved for an even broader wavelength range, playing a significant role in discovering a new generation of photodetectors. “I believe in this technology. We are achieving something that can improve the current state of technology, and we are not far from reaching even more high-value applications of our work.”

This research was undertaken thanks in part to funding from the Canada First Research Excellence Fund, initiated with a seed grant from TQT.

To learn more about the quantum detectors developed at TQT, please see the following publications: 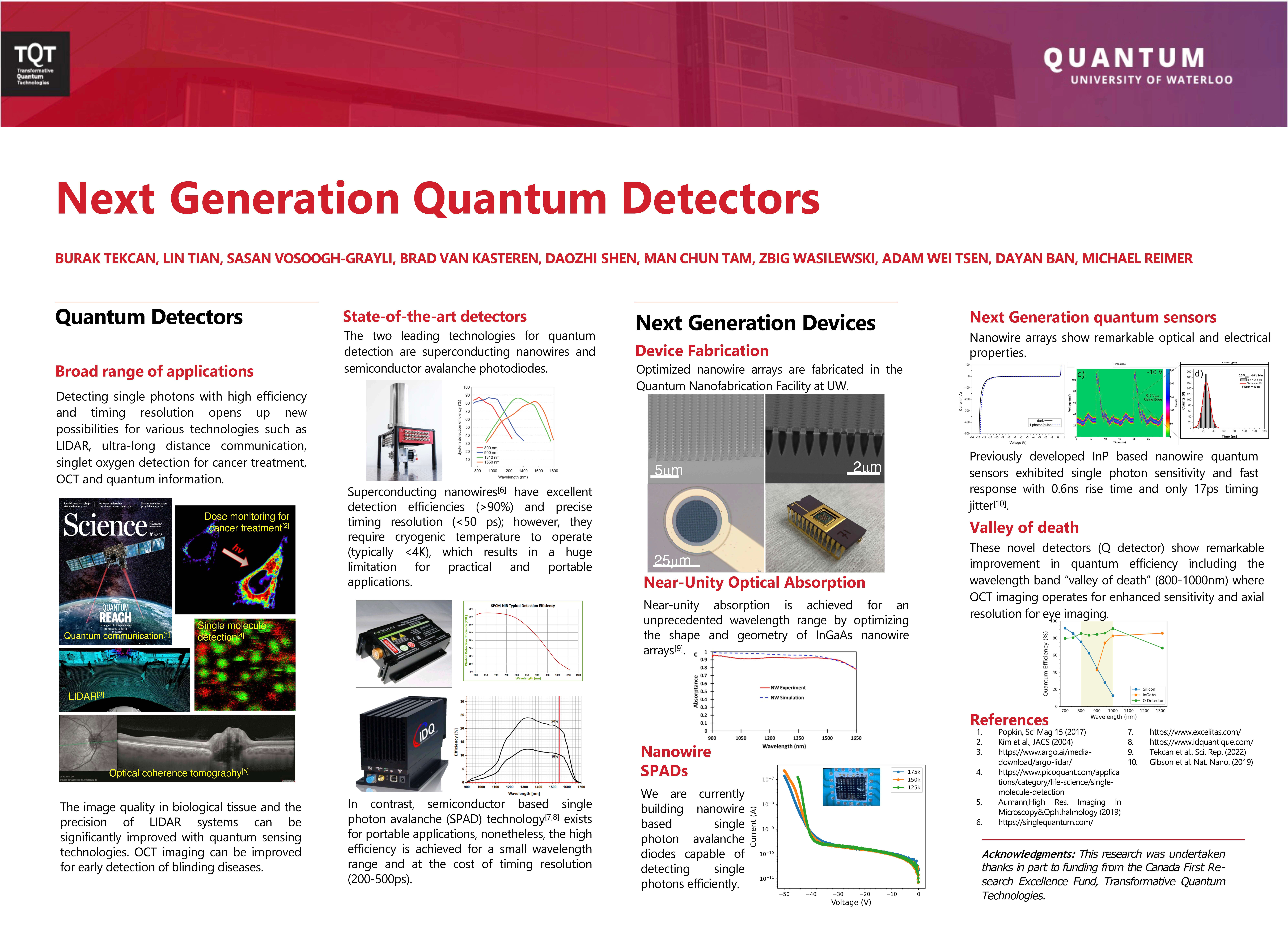