A new way to use neutrons

A new way to use neutrons

Researchers at the Institute for Quantum Computing (IQC), in collaboration with researchers from the National Institute of Standards and Technology (NIST) and the National Institute of Health (NIH), have developed a neutron interferometry technique that is more powerful, robust and practical than existing techniques, paving the way for advances in imaging, materials science, and fundamental physics and quantum research.

Many traditional imaging techniques transmit particles through an object. When some of the particles are absorbed, the remaining particles create a shadow image of the object. For example, during x-ray imaging, the object absorbs some of the x-rays while a detector behind it captures the rest. Depending on the object’s ability to absorb the x-rays, it can be difficult to obtain an accurate profile of its material and structure.

Interferometers take a different approach to imaging. They map out the interference patterns produced by a beam which has passed through the object. Instead of measuring the amount of particles that pass through, the interferometer detects the phase changes of the particles. Neutron interferometry uses neutrons –subatomic, electrically neutral particles that carry spin and have unique penetrating abilities. These properties make neutrons useful for probing all types of matter and structures.

Recently, PhD student Dusan Sarenac, faculty members Dmitry Pushin and David Cory, along with a team of international researchers developed a new broadband, two-phase grating interferometer technique. Without any absorption, the novel approach uses the whole neutron beam, resulting in significantly faster measurements. The technique overcame the main obstacles associated with neutron interferometry, which limited the technique to a few places in the world.

“This technique will allow us to perform highly impactful experiments, such as the precise measurement of the Newtonian constant of gravitation,” said Pushin, also a professor in the Department of Physics and Astronomy at the University of Waterloo. The two-phase grating interferometer was used to conduct dark-field imaging, a small angle scattering technique for neutrons that reveals the internal correlations inside of the sample material and is promising for the study of new materials.

They also demonstrated increased sensitivity by adding a third grating to the interferometer set-up, allowing the length of the interferometer to stretch from about 1 centimetre up to 4 metres. The additional length makes the device even more sensitive to specific neutron interactions allowing for very precise measurements.

“What’s great about this set-up is that the gratings can be made in any nanofabrication facility, and the techniques of neutron interferometry can become available at many neutron sources worldwide,” said Sarenac, lead author on the experimental results published today in Physical Review Letters. “We’ve developed a tool that’s more powerful and easier to build.”

The simple configuration consists of aligning common optics components with the gratings and the detector. The interferometer works with a broad distribution of neutron wavelengths and it is also less sensitive to vibration and temperature variances than other types of interferometers, making it more robust and practical for use at any neutron source.

Neutron interferometry has been used for precise characterization of materials, as well as for probing the fundamental aspects of quantum mechanics.

This experimental work was conducted at the NIST Center for Neutron Research (NCNR) in Maryland, United States; and was supported by the Canada First Research Excellence Fund (CFREF). Dusan Saranac is a PhD student in the Department of Physics and Astronomy. His supervisor David Cory is a professor in the Department of Chemistry and a Canada Excellence Research Chair Laureate. 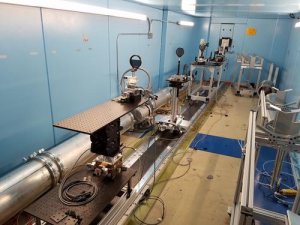 The neutron interferometer set-up beside the neutron beamline at the National Institute of Standards and Technology (NIST) Center for Neutron Research (NCNR) in Maryland, United States.