Magnetic fields are all around us—and even in us—all the time, and they often prove useful in technologies we rely on, like hard drives, MRI scanners and the power plants that provide us electricity.

Measuring small magnetic fields at an atomic scale would allow even more applications in areas of physics, materials science, data storage and biomedical science, including characterizing the magnetic properties of thin-film materials, performing magnetic resonance imaging of single proteins and measuring neural activity at the level of single dendrites.

By purposefully creating a defect in some medium, researchers can measure the effect of a small magnetic field on the state of that defect. This setup is called a spin sensor. With more than one defect, it is possible to entangle their states and achieve a quantum enhancement with precise results at the atomic scale.

There’s just one problem: there are many obstacles to achieving a quantum enhancement with a spin sensor, including the detrimental influence of random environmental defects, limitations in experimental control, decoherence and time constraints.

Alexandre Cooper-Roy, IQC Research Associate and Senior Technical Lead, Quantum Simulation at Transformative Quantum Technologies (TQT), led a team that developed a quantum spin sensor using an intriguing idea. Instead of trying to isolate their primary defect from a nearby environmental defect, they decided to entangle the two defects in pursuit of a quantum enhancement and to allow multiple readouts of their primary spin state.

Instead of treating the environmental defect like a problem, they treated it as a solution.

To understand how the sensor works, you have to understand spin. Subatomic particles like electrons and protons aren’t actually little balls spinning on their axes. Rather, when these elementary particles move through a magnetic field, they are deflected in a way that makes them act magnetically much like a charged, spinning object does in the classical world.

So “spin” is an analogy, and particles can be deflected in one of two directions. When a weak magnetic field interacts with the electron of a solid-state sensor, it impresses information on its spin, which can then be read optically using lasers.

Quantum-enhanced sensors that make use of entangled spin defects can be used to measure weak magnetic fields at the atomic scale. Cooper-Roy uses the example of a quantum sensor able to measure neural activity at the level of single dendrites—microscopic branches that transmit electrochemical signals between neurons—by measuring the magnetic field associated with neural activity. Studying the brain in such unprecedented detail could be a boon for the study of the brain and its diseases.

“We know how to measure magnetic fields with these spin sensors,” said Cooper-Roy. “And even though spin is a quantum mechanical phenomenon, these sensors are not really quantum-enhanced devices. Achieving a quantum enhancement is like the Holy Grail.”

Cooper-Roy and his team of researchers from MIT swapped out a carbon molecule of a diamond with nitrogen to create what they call a nitrogen-vacancy (NV) centre, a defect in the diamond. It is possible to use the electron spin of this centre as a sensor for weak magnetic fields, but single-spin sensors run into problems. Namely, environmental defects caused by the process of making the NV centre limit the performance of the sensor.

“Given that we want to achieve a quantum enhancement, and given that it is extremely hard to deterministically create a pair of spins because we have this environment full of uncharacterized and uncontrolled defects, we thought maybe we could use these defects for some purpose,” said Cooper-Roy.

Instead of viewing these environmental defects as a problem to avoid, Cooper-Roy and his team realized they could entangle an environmental defect’s spin with the NV centre spin. Theoretically, there could be a notable improvement in sensitivity using entangled spins rather than a single spin sensor.

The researchers went to work coupling the spin of their NV centre with the spin of a nearby, unknown environmental defect. They achieved entanglement and were able to use their coupled spins as a sensor for weak magnetic waves at an atomic scale. Limitations in experimental control mitigated the level of quantum enhancement they achieved, but they also achieved a novel feat that allowed for further enhancement. The coupling of the two spins not only allowed for an entangled sensor, but also the ability to read the sensor’s data multiple times to improve the signal-to-noise ratio.

Normally, when you measure the spin of the NV centre after it has been exposed to a weak magnetic field, the information about the field is destroyed. Because their NV centre was entangled with an environmental defect, the researchers were able to use the defect’s spin as a sensor of the state of the NV centre, thus allowing them to read out the information multiple times. “It is like having a little magnet lined up with a big magnet: to find out the direction of the big magnet, you simply have to look at the little magnet,” said Cooper-Roy.

Repetitive readout of nuclear spin has been achieved previously, but not of electron spin. Firing a laser at an electron to read its information typically dislodges it. The unique environmental defect in this experiment was immune to this effect, and so it was perfect for repetitive readouts of the magnetic field data. 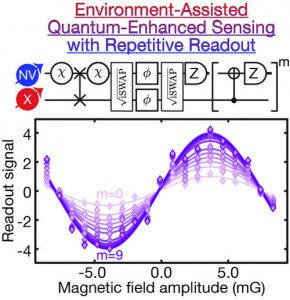 There is still a long way to go before we have a perfect quantum spin sensor, but this new approach provides a promising paradigm for future advancements.

“The idea that the environment can be controlled and put to work, and that this idea is platform independent, is a useful shift in paradigm,” said Cooper-Roy. “The fact that you cannot normally control the environment, but through your system you can control it and expand your own system, really opens up new opportunities in quantum sensing.”