Christine Muschik, assistant professor at the Institute for Quantum Computing (IQC) and the Department of Physics and Astronomy at the University of Waterloo, was selected as a 2019 Alfred P. Sloan Research Fellow in Physics.

Muschik is recognized for her research in quantum networks and quantum simulations, including exploration of the quantum simulation of ‘gauge’ theories that describe the interactions of fundamental particles like quarks and gluons. She hopes to turn this theory into technology by developing practical simulation concepts that might soon be realized in the lab, shedding light into the area of high-energy physics.

“The ultimate long-term vision is to tackle problems that cannot be addressed with numerical methods,” said Muschik, also an Emmy Noether Fellow and affiliate at the Perimeter Institute for Theoretical Physics. “This includes questions related to heavy ion collisions in particle accelerators, matter at extreme densities or the physics of the early universe.” 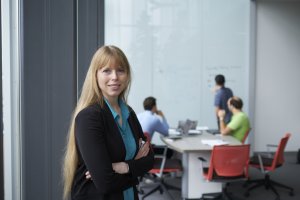 At IQC, Muschik leads the Quantum Networks and Quantum Simulations group to develop new protocols for building and maintaining quantum communications networks. By using novel dissipative techniques in quantum error-correction, she plans to design a robust and sustainable quantum network that could have applications for quantum communications, cloud computing, sensing and even play a role in fundamental test of nature.

Awarded to early-career scientists and scholars of outstanding promise, the Sloan Research Fellowships support research at the fundamental level. They are granted annually to 126 researchers in recognition of distinguished performance and a unique potential to make substantial contributions to their field.

Read more about Christine Muschik’s work in the latest issue of NewBit.