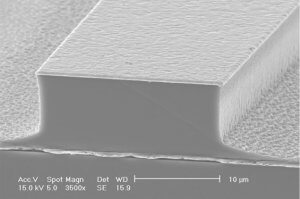 A new type of high-power quantum cascade laser that works without bulky cooling equipment could usher in a host of novel imaging applications by making it easier to generate terahertz radiation outside the laboratory. The laser, which was developed by researchers at the Massachusetts Institute of Technology in the US and the University of Waterloo, Canada, can operate at temperatures of up to 250 K – some 40 K higher than the previous record, and attainable with a compact cooler rather than a specialist cryogenic system.

Terahertz (THz) radiation falls between the infrared and microwave regions of the electromagnetic spectrum, with wavelengths in the range of 3 mm – 30 µm. While many molecules absorb light at these wavelengths (making it possible to use THz radiation to identify their molecular “fingerprint”), THz radiation passes straight through everyday materials such as paper, cloth and plastics. This means that THz radiation, like X-rays, can be used to “see” inside objects that are opaque to visible light. Unlike X-rays, however, photons in the THz region have relatively low energies, making THz radiation non-ionizing and therefore safe for biological and medical use. A further benefit is that THz radiation has a shorter wavelength than microwave radiation, which means it can create higher-resolution images.

While all of this sounds good on paper, radiation between 0.1 and 10 THz is underused in practice due to the lack of practical sources and detectors in this range. Generating THz beams that are intense enough to be useful is also a challenge. Quantum cascade lasers (QCLs) are one option, as their microscopic structures can be tuned to produce coherent THz radiation. However, these lasers must be kept at very low temperatures to function.

Researchers led by Qing Hu and Zbig Wasilewski have now partially overcome this barrier by developing a QCL that produces light in the THz region with only a modicum of cooling. At 250 K, the new laser’s maximum operating temperature is significantly higher than the previous maximum of 210 K that Jérome Faist’s group at ETH Zurich in Switzerland achieved in 2019 – a record that was itself much higher than the 2012 record of 200 K.

The temperature-sensitive nature of QCLs stems from the way they are constructed. Unlike standard semiconductor lasers, which generate photons when electrons and holes combine inside a material with a given electronic energy band gap, QCLs consist of tailor-made quantum wells and barriers made of thousands of thin layers of semiconductors. Each electron that travels through the device “cascades” through a series or “staircase” of these quantum wells (QWs) as it passes through the semiconductor layers. In the process, the electron emits multiple photons at frequencies that are set by the structure of the layers.

At higher temperatures, electrons tend to “leak” over the barriers of the QWs, disrupting the laser’s output. Hu and colleagues’ breakthrough came after they managed to reduce this leakage by developing new semiconductor band structures – an improvement which, in turn, enabled them to double the height of the barriers. They also devised a novel configuration in which lower lasing levels of each step of the quantum-well staircase are quickly depopulated of electrons by scattering phonons (vibrations of the quantum lattice) into a ground state. This state then serves as the “injector” of electrons into the upper level of the next step, Hu explains, and the process repeats so that lasing can occur.

The structures the team created are very complex and contain close to 15 000 interfaces between QWs and barriers, half of which are less than seven atomic layers thick, Wasilewski explains. The quality of these interfaces is, he adds, paramount to the THz laser’s performance.

One near-term application for the new THz source would involve the real-time imaging of skin during skin-cancer screenings, Hu says. Cancer cells show up “very dramatically” in THz light, he explains, because they contain more water and blood than normal cells, and water strongly absorbs THz signals. The technology could also be used to detect drugs like methamphetamine and heroin and explosives like TNT since these molecules have a spectral fingerprint within the THz frequency range too.

The researchers, who report their work in Nature Photonics, say that in the future it should be possible to generate THz radiation with a QCL without the need for a cooler at all. They now plan to further increase their device’s maximum operating temperature while also lowering its lasing threshold to reduce heat dissipation. “This will enable a compact and portable laser system operating in a continuous way, which is more useful in applications,” Hu tells Physics World. “For example, a single-frequency continuous laser based on a distributed feedback structure is essential for high-resolution spectroscopy and sensing.”

Hu and his colleagues are also developing compact THz imaging systems with a high dynamic range, which is required to penetrate thicker layers of material and allows for faster imaging. “We are also developing broadband THz radiation amplifiers, akin to the amplifiers used at the front end in cell phones and radio receivers,” he says. “Since most THz signals are quite weak, be they from the universe (90% of photons in the universe are in the THz range) or from earthly sources, amplification will greatly ease the demanding requirements for detection and subsequent signal processing.”