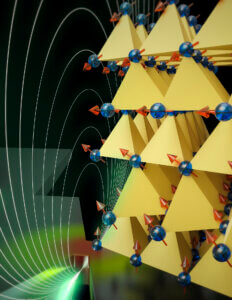 Researchers at the University of Waterloo and supported by Transformative Quantum Technologies have demonstrated the feasibility of Nuclear Magnetic Resonance diffraction (NMRd) to investigate the lattice structure of crystalline solids on an atomic scale, a feat that had only been possible for larger-scale imaging applications like Magnetic Resonance Imaging (MRI).

“NMRd was proposed in 1973 as a method to study the structure of materials,” said Dr. Holger Haas, one of the lead authors of the study and alumnus of the Institute for Quantum Computing (IQC) in Waterloo, now at IBM. “At the time, the authors discarded their idea as ludicrous. Our work comes tantalizingly close to realizing this crazy idea of theirs – we have shown that it is possible to study structures on an atomic length scale over sample volumes that are relevant for many biological and physical systems.

“NMRd opens up a tremendous variety of capabilities in many research directions, including studying both nanocrystals and organic compounds,” added Haas. The ability to image biological structures, like protein molecules and virus particles, on the atomic scale can advance the understanding of their function and potentially lead to new drug therapies and treatment options.

NMRd works by exploiting a property in nuclei called spin, a fundamental unit of magnetism. When placed in a magnetic field, the nuclei essentially act as magnets due to this spin. A time-varying magnetic field can perturb the spins, changing the angle of the spin – in technical terms, this is called encoding a phase in each spin. At a particular encoding time, all spins will point back to the initial direction. When this occurs, a diffraction echo is observed, a signal that can be measured to find the lattice constant and shape of the sample. Each nucleus will produce a unique signal, which can be used to discern the structure of the molecule.

The challenge in achieving atomic-scale NMR was the difficulty of encoding large relative phase differences between neighbouring nuclear spins on the atomic scale, meaning that a diffraction echo could not be observed. The researchers overcame this limitation by using quantum control techniques and generating large, time-dependent magnetic field gradients. With this, they could encode and detect the atomic scale modulation in an ensemble of two million spins and measure the displacement of the spin ensemble in a sample with subatomic precision.

This research represents substantial progress in establishing atomic-scale NMR as a tool for studying material structure.

Sahand Tabatabaei, co-lead of the study and PhD student at IQC and Waterloo’s Department of Physics and Astronomy, adds, “now that we are close to being able to do NMRd on a lattice at the atomic length scale, we can also really start studying more fundamental quantum physics, like quantum transport phenomena and quantum many-body physics, at the atomic length scale, which hasn’t been done before on samples of this size.”

This story was first published on Waterloo News.