A new device being tested in the University of Waterloo Optometry Clinic may one day help prevent the leading cause of vision loss in older adults – and it all started with a chance conversation among quantum physicists.

Dmitry Pushin, a professor in the department of Physics and Astronomy, was talking to another physicist about his team’s quantum light research when the colleague mentioned that Ben Thompson, a professor in the School of Optometry and Vision Science, was studying macular degeneration and how the eye and brain see light.

Pushin’s team, based at the Institute for Quantum Computing (IQC), had been asking the question: “Can people see quantum light with the naked eye?”

When his research team proved the human eye could indeed see quantum light, they wondered: “What can we do with this?”

Across campus, Thompson and his team were researching eye exams, asking: “How do we compare what people think they see to what they actually see?”

For Pushin, this was an opportunity for collaboration because the two research groups were asking similar questions through different lenses.

Waterloo’s culture, the research teams agree, helps foster this type of interdisciplinary research. Its unique intellectual property policy, that allows researchers to own what they invent, encourages people to work together and try out new areas, Pushin says. 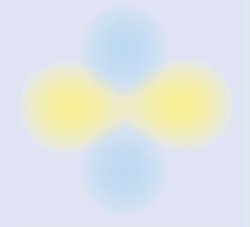 Taking this idea of quantum light and macular degeneration back to the lab, Pushin’s team developed a device that allows optometrists to see how the human eye tracks polarized light. A person with healthy eyes can detect polarized light in the form of a blurry spot in their field of vision – a phenomenon known as Haidinger’s brush. This is due to structural properties of the macula, which are compromised in individuals with macular degeneration.

Today, macular degeneration is often diagnosed after irreparable vision loss has occurred. Connor Kapahi (PhD in progress), a PhD student in Physics and Astronomy, and Dusan Sarenac (BASc ’14, PhD ’18), technical lead at IQC’s Transformative Quantum Technologies (TQT) group, built the camera, which is capable of illuminating and imaging a patient’s retina with novel forms of light. The research was funded through TQT which is a Canada First Research Excellence Fund Initiative.

This diagnostic tool is being tested at Waterloo’s Optometry Clinic with the hope that it may one day detect macular degeneration in patients earlier. “Our collaboration is an unusual one, not only because it connects a relatively abstract topic in quantum technology to an established medical field in vision research, but also because it spans continents,” Kapahi says.

Thompson, now based in Hong Kong and running the University’s new Centre for Eye and Vision Research (CEVR), is taking the collaboration international which is significantly improving their ability to test the device on patients.

Thompson sees the Waterloo environment as key to creating opportunities for interdisciplinary research because researchers from such different disciplines typically don’t connect at many other universities. Waterloo has an open, collegial culture that actively promotes interdisciplinary collaboration, new ideas and “blue skies” thinking, he says. This environment makes it possible to identify new connections with researchers from very different disciplines.

Interdisciplinary research is powerful but it poses many challenges such as communication, confidence in moving outside of your comfort zone and trusting collaborators outside your discipline, Thompson says.

“Early exposure to successful interdisciplinary research allows trainees to overcome these fundamental challenges and experience the exhilaration of being involved in the generation of new ideas and technologies that would not have been possible without combined expertise. This, in turn, lays the foundation for trainees to incorporate interdisciplinary projects into their future careers.”

The cutting-edge invention is attracting talent to Waterloo. During the research phase, Thompson welcomed Andrew Silva, a Postdoctoral Fellow in the School of Optometry and Vision Science to the team. Silva was instantly engaged in the research that extended beyond silos and the usual academic restriction. Learning to think in a collaborative and interdisciplinary way early on helps shape your focus and future as a researcher, Thompson said.

“Something extra can be found through collaboration,” Kapahi says. “By collaborating across fields that have historically been separate, researchers can find opportunities to solve problems that their colleagues might have thought intractable. I see interdisciplinary collaboration as a cornerstone of the future of academic research.”