Researchers at the Institute for Quantum Computing (IQC) performed the first demonstration of quantum-enhanced noise radar, opening the door to promising advancements in radar technology.

The researchers showed how the quantum process can outperform a classical version of the radar by a factor of 10, enabling the detection of objects that are faster, smaller, or further away – all while making the radar less detectable to targets.

“We are applying technology developed for quantum computing to immediate, practical situations,” said Christopher Wilson, a professor in the Department of Electrical and Computer Engineering at the University of Waterloo and principal investigator of the Engineered Quantum Systems Lab (EQSL) at IQC. “Our results show a promising improvement for radar, an important real-world application, using quantum illumination.”

In the lab, Wilson’s team performed a proof-of-principle radar detection experiment to directly compare the performance of a quantum protocol to a classical protocol. The researchers generated entangled photons using a device they designed to produce multiphoton entanglement of microwave light at frequencies near 5 GHz—the same frequency band as wireless communications used by cellphones and Wi-Fi connections.

Next, they created a classical source of photons that, on the surface, replicated the signals produced by the quantum device, but without the entanglement. When the photons from each source were sent through the detection scheme, in a head-to-head comparison between the quantum and classical protocols, the researchers found that the quantum source outperformed the classical source by a factor of 10.

They found that the improved performance occurred only when the signal levels were around the single-photon level, which is much weaker than what a typical radar system uses. While there are clear technical paths to improve the signal power, Wilson notes, “There is an enhancement when your signal power is inherently small, so this has potential applications in situations where the user doesn’t want the subject to know they are being tracked.” 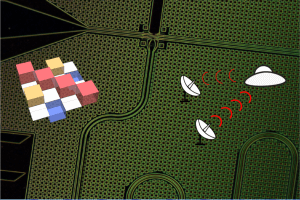 Figure 1. Micrograph of the device used to generate the entangled microwave signals. The measured correlations between the signals that prove they are entangled. Cartoon of the radar protocol.

The experiment marked a milestone as the first demonstration of quantum illumination in the microwave regime. “This is exciting because it is the same frequency that most radar systems operate at, meaning there could be more immediate, practical applications for current radar technology,” explained Wilson.

Quantum-Enhanced Noise Radar, in collaboration with the Université de Sherbrooke and Defence Research and Development Canada (DRDC), appeared as the cover article of Applied Physics Letters on March 18. This research has been undertaken in part thanks to the Canada First Excellence Research Fund (CFREF).