An experiment that began by testing the properties of quantum entanglement has led to the discovery of a new diagnostic tool that could help optometrists detect macular degeneration much earlier than was previously possible.

University of Waterloo researchers from the Institute for Quantum Computing (IQC) set out to test the human eye’s ability to perceive one of the properties of quantum entanglement, but quickly realized that the tool they created to test their theory had an immediate practical use. 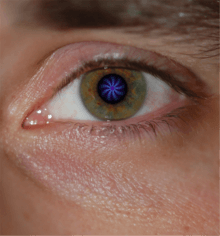 The IQC researchers then teamed up with researchers from the School of Optometry and Vision Science to use their work to design a unique form of light that is visible to people with healthy eyes, but not to people whose eyesight is degenerating.

“This started as an experiment to see how people can directly perceive a quintessential property of quantum entanglement,” said Dusan Sarenac, lead IQC researcher on the project. “But the collaboration quickly showed that these quantum applications can help humans right now.”

A person with healthy eyes can detect polarized light in the form of a blurry spot in their field of vision—a phenomenon known as Haidinger’s brush. But those with unhealthy eyes—macular degeneration—can’t see it at all.

People with an increased risk of developing macular degeneration would have a harder time seeing and tracking the polarized light profiles, the researchers reasoned. Intrigued by the hypothesis, the team prepared a unique form of light that would have particular polarization capabilities not commonly found in nature.

Using this quantum technology, the vision science team, led by Andrew Silva, ran an experiment with human participants. While a camera would only see a spot when looking at the light, the majority of participants were able to discriminate and respond to the profiles that are filtered by the healthy macula in the human eye.

Based on these findings, the team is currently developing a structured light microscope that will allow optometrists to image and track physiology of the eyes and in particular macular degeneration in patients. It is important, though tricky, to detect macular degeneration early in order to achieve the best treatment outcomes. Researchers aim to explore if this test will enable the disease to be caught earlier than current tests.

Sarenac and Silva are working with groups from IQC’s Transformative Quantum Technologies (TQT) led by chemistry professor David Cory and physics and astronomy professor Dmitry Pushin, and with a group led by Ben Thompson, a professor at the School of Optometry and Vision Science.

The study Direct discrimination of structure light by humans by Sarenac, Kapahi, Silva, Cory, Taminiau, Thompson and Pushin was published in Proceedings of the National Academy of Sciences of the United States of America (PNAS) on June 16, 2020.

TQT is funded thanks in part to the Canada First Research Excellence Fund (CFREF).