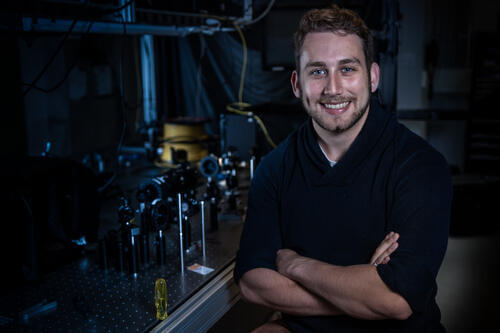 Cameron, a student in the Department of Physics and Astronomy, studies ultrafast quantum optics and looks for ways to measure properties of photons on very short timescales in the Quantum Optics and Quantum Information Lab. And it’s those tiny particles of light that he uses as a starting point to introduce the fundamentals of quantum mechanics during his outreach.

“I like to start with light and show how, with enough imagination, you can build all the way up to quantum computing,” said Cameron, who has participated in several IQC outreach programs.

Cameron has visited high school classrooms to teach young students about quantum information science and technology, participated in tours for visitors to IQC, and given lectures and performed labs with high school students in the Quantum Cryptography School for Young Students. He is also a member of the student-led outreach group Unentangled, serving as financial officer and visiting high school classrooms to facilitate workshops before the pandemic.

He sees outreach as an important duty linked to the revolutionary potential of his field of study. “If you’re researching something that has the potential to change technology and the planet, that’s exciting for everybody, but it is especially exciting for people who don’t know what you’re doing and haven’t chosen their career path yet,” said Cameron. 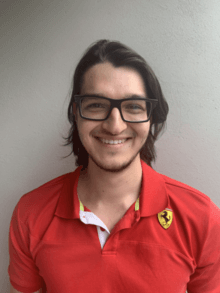 Kapahi, also a student in the physics and astronomy department, knows the importance of outreach programs first-hand: “I wouldn’t be here without USEQIP [the Undergraduate School on Experimental Quantum Information Processing],” he said.

After completing USEQIP in 2017, Kapahi came to IQC as a master’s student and now studies structured waves under IQC and Physics and Astronomy faculty member Dmitri Pushin. “Basically, we want to make the wavefunction of the neutron corkscrew around,” said Kapahi. “We’ve been looking for applications for using these structured beams.” One interesting possibility is a device to diagnose macular degeneration with less cost and more certainty.

Outside of the lab, Kapahi has designed modifications for a board game being developed by the University of Waterloo’s Transformative Quantum Technologies that will introduce young students to the physics of light, crucial for understanding much of the development of quantum mechanics.

“We had some students come in and try the game out in 2019, and it was great to see,” said Kapahi. “It makes you excited for physics again. The reason you start doing physics because you’re excited about it as a kid.”

Kapahi has also participated in high school class visits, including virtual visits throughout the pandemic, and he helped design an experiment for USEQIP students to perform as part of their learning.

While he finds outreach its own reward, he sees the importance of the David Johnston Award for recognizing an important aspect of being a well-rounded researcher.

“It’s great that IQC is incentivizing grad students to pursue something that is worth it in its own right, but is difficult to make that initial time commitment,” said Kapahi.

“I think outreach is something that more grad students need to be a part of because trying to communicate ideas to people who don’t have the background you have is an incredibly valuable skill, and it’s something you can only really get through the crucible of the classroom.”