A Look Back on the Canadian Graduate Quantum Conference

A Look Back on the Canadian Graduate Quantum Conference 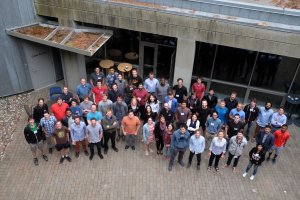 June 20th-22nd saw the inaugural Canadian Graduate Quantum Conference (CGQC) take place at the University of British Columbia. Jointly organized by Transformative Quantum Technologies (University of Waterloo), Institut Quantique (Université de Sherbrooke) and the Quantum Matter Institute (University of British Columbia), the objective of the conference was to connect both the student and postdoctoral fellow (HQP) communities from each of the three Canada First Research Excellence Fund (CFREF) centres and inspire collaborative projects for quantum research spanning across Canada.

CGQC was organized by, and directed towards, the HQP community. The intent was to provide an open and comfortable environment for discussions amongst peers around their state-of-the-art research, and to promote natural bonds to form between researchers and their ideas. “Even working with students from QMI and IQ to organize this event was a very fun and encouraging experience, and provided a glimpse of the potential future collaborations that can happen across these three institutes”, says Madelaine Liddy, a member of the organizing committee, representing TQT.

Conference activities opened with remarks by a keynote speaker from each CFREF centre, followed by an array of student presentations, lab tours of UBC’s Quantum Matter Institute, poster sessions, and an industry panel and workshop. Although, it could be argued the most collaborative interactions happened between sessions over a coffee and donut, or watching the sun set over the mountains at UBC’s beach. 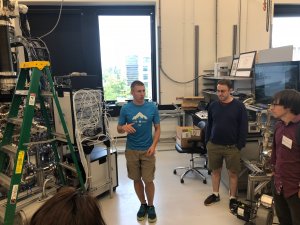 Attendees touring QMIs facilities, including a look of the new ARPES. 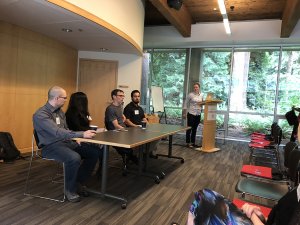 The organizing committee’s hope is that future iterations of this conference will evolve each year to reflect the needs of the quantum HQP community. Ideally, friendships created and knowledge of each CFREF centre gained this year will lead to the creation of CFREF-funded student projects from each successive conference. Visitations between the institutes are already in the works. “The CGQC has sparked a wonderful display of enthusiasm amongst quantum researchers and staff. We hope to build on this momentum by organizing approximately 18 visits amongst the CFREF centres over the next few months”, says Tracey Forrest, program director of TQT. Next year’s CGQC 2019 will take place at Université de Sherbrooke’s, Institut Quantique.